Do you have Early Blight?

Early blight is caused by the fungus Alternaria solani, which infects both potato and tomato crops, along with other species of the Solanum family, causing yield losses due to reduction in green leaf area (early senescence) and direct infections of fruits and tubers.

Symptoms often appear first on older leaves near the ground as dark brown spots surrounded by a zone of yellowing or chlorosis. On stems, lesions appear as dark patches of collapsed tissue giving a darker, shrunken zone. Girdling of the stem by this kind of lesion can cause death of the plant. On potato tubers, lesions appear as dark, dry, shrunken patches on the skin, extending into the tuber.

The fungus survives in soil and crop debris and is spread by many cycles of infection by asexually-produced spores (conidia). These are produced in humid, damp conditions, typically close to the ground or on diseased leaves during prolonged wet or humid weather, and are dispersed by wind and rain. The spores germinate to infect crops in wet conditions via wounds, stomata and direct penetration of leaves. In particularly warm and wet conditions (20-30°C), this can take only a few hours. Symptoms appear in 2-6 days after infection depending on temperature.

Spores of early blight A. solani (above, right) have a long tail, compared to those of Alternaria alternata (above, left) which are much shorter and rounder and also infect potato crops.

The disease can be spread to new locations on infected seed tubers. It can also be encouraged by hedgerow plants or weeds such as nightshade (Solanum family).

Removal of as much crop debris as possible after harvest and leave at least a 3-year separation in cropping of potatoes on the same land. If possible add mulch to prevent dispersal of spores. Irrigate crops early in the day so the leaves remain wet for as short a period as possible or use drip irrigation. Increase row separation slightly to improve ventilation. Remove Solanum species such as nightshade and potato volunteers. There are reports of differences in susceptibility of varieties to early blight but resistance information is currently not included in the AHDB potatoes variety database.

Fungicides: According to the label, these usually need to be reapplied every 7-14 days. Most potato ‘blight’ information actually relates to ‘late blight’ caused by Phytophthora infestans. However, against Alternaria species, fungicides available include: QoI (strobilurin fungicides) and alternatively, hydrogen peroxide, potassium bicarbonate or copper-containing products such as Bordeaux Mixture for organic crops. Chlorothalonil has been withdrawn, mancozeb is likely to be withdrawn (in 2023 or 2024).

Do you have Early Blight? 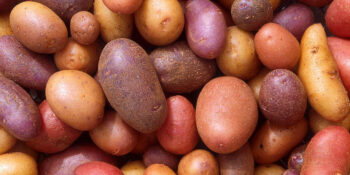